The Partial Transformation of Elton Bank

Edith Sugden sees them first. Their shadowy figures weave down the central reservation of the dual carriageway that stretches from the front doors of Elton Bank towards the distant centre of Leeds. 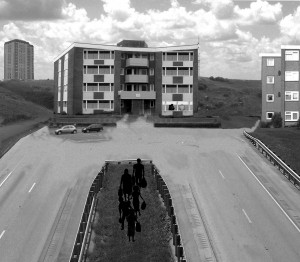 Like Edith the carriageways are substantial. They were designed by planners with aspirations bigger than their budgets. The twin strips are so devoid of surrounding houses that they resemble an airport runway, with Edith commanding a clearer view than most air-traffic controllers.

Edith’s binoculars, and careful lifting of the net curtain, help her resolve the five strangers into a family. Each family member, from the tall father to the smallest child, is burdened by at least two carrier bags. Edith makes out the diversity of colours and is surprised that one family can shop in so many different places.

“Do you think they’re coming here?” Edith asks her husband.

George doesn’t reply. He hasn’t replied for four years. He stopped speaking about a year before he died, but that never bothered Edith who talked through his silence and then transferred her conversations to his empty chair. She enjoys the freedom to speak her mind without interruption or contradictions.

“They must be heading for flat eight or nine. They’ve been empty for ages and I bet that landlord will let anyone have them.”

Edith thinks George has changed for the better since he died. He recently agreed to sit next to her with his back to the television. Edith finds the window provides almost all of her entertainment and a well-placed mirror helps her watch Strictly Come Dancing without any danger of missing a real-life incident.

Edith Sugden sees them first and describes them to George’s empty chair. Through her binoculars she follows the slow progress of four shadowy figures as they ascend the arid path alongside the dual carriageway.

Norman races down three flights of stairs to beat Sandra and be the first to tell them that the lift has broken. Before he arrives Kylie has already opened her door to find out their names, but even she is not the first to speak to them, the first to get a response, or the first to shout.
As soon as she saw them, Rose had flung open her large window, which no longer has any locks, and shouted a welcome loud enough to startle the newcomers and alert the whole of Elton Bank.

Sandra and Adam hurriedly arrive from the back bank and join Kylie, Norman and Rose in engulfing the new family with offers of help. The family discover their own hands are empty as they ascend to the top of Elton Bank and unlock the door of flat nine.

Norman strides ahead and points out the fine front view into Leeds city centre. He also comments on how his own flat faces the wrong way and his only view is the back one. The frown on his face suddenly transforms into a smile and he rushes across the crowded living room. Norman opens the window, takes a deep lungful of perfumed air, and encourages everyone to wave to the family smiling up from below.
He points out and names each person and with a proud fatherly flourish tells them the stories behind the blanket of flowers, the three benches, the picnic table, the rope swing, the idiosyncratic picnic rugs, the new wheelchair ramp and the troublesome first lighting of the barbecue. His long explanations are politely interrupted by Kylie, who delivers a chocolate cake she had planned to reveal at the end of today’s picnic. She doesn’t stop to talk, as she only just has time to make another cake before the picnic starts and she is excited about a new idea for icing.

Kylie almost knocks Rose back down the flight of stairs she has so laboriously climbed and only Barry’s strong grip on Rose’s arm prevents a marigold fuelled catastrophe.

Rose delivers her bunch of flowers and gratefully sinks into the only armchair. Barry explains to the family that they are expected to join the picnic but not to bring any food. Sandra has offered to give Barry’s wife, Lorna, a lift to Lidl, while Barry’s children play with Adam. Lorna will be able to pick up extra items for the barbecue. Barry checks the family’s dietary requirements and is relieved that chicken and pork can both stay on the menu. 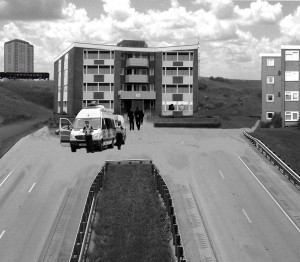 Edith Sugden is the only one to see the first family depart. Her binoculars help her discern the subtle differences between the uniforms of the Home Office and the police. Her naked eyes, even in the weak pre-dawn light, can recognise social workers as they handle the children. She sees the tall man pushed into the van and his wife and three children bundled in after him.

She smiles and turns to George’s empty chair.

“Good riddance,” she says. “We don’t want that sort bringing down the neighbourhood.”